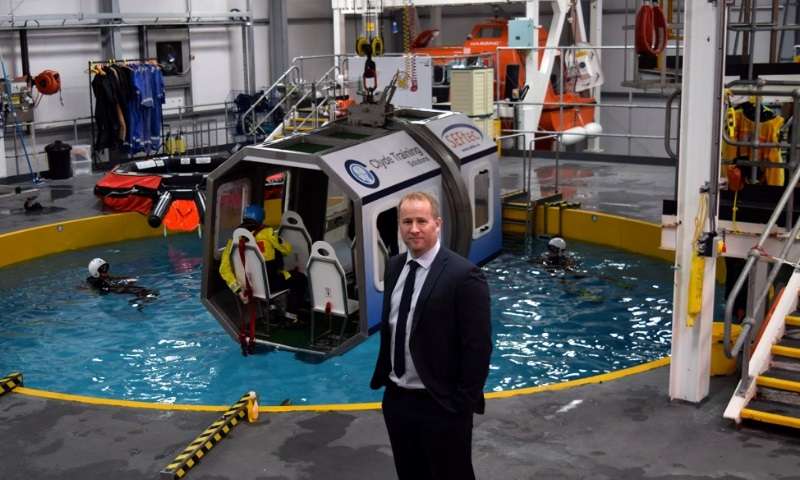 Having been with CTS since launch in 2016, initially as Centre Manager and more recently as General Manager, Kris McDonald gives some insight to his career to date, where he hopes to take CTS over the next five years, and how we nearly lost him to Hollywood!

What was your career background before joining CTS

Well, before I even started my career path, the thing that ultimately led me to where I am today, was my love of diving.

After enjoying what was a hobby for many years I took and passed my diving instructors course, and then began my travels around South-East Asia – Thailand, Vietnam & Cambodia – and Australia, teaching diving as I went.

On returning to the UK in 2005, I decided to see if I could use these skills in a more permanent environment and was lucky enough to be offered the role of Survival and Marine Instructor with Petrofac in Aberdeen.

After almost 6 years in this role (I did get tempted again by the Australian sun for a year) I was then offered a life-changing role as Team Leader with Petrofac in Houston, USA, with responsibility for setting up an OPITO approved training centre in collaboration with NASA.

What may seem on the face of it, to be an odd partnership, was in fact a perfect scenario. NASA, after the cancellation of shuttle flights, had to come up with a commercial plan to allow their astronaut training facility, The Neutral Buoyancy Laboratory, continue to operate and Houston was a hub for thousands of Oil & Gas employees working in the Oil fields of the Gulf of Mexico.

After 4 years in Houston I was then tempted back to the UK in 2015 by Northern Marine Group to act as Centre Manager for another newly established training centre in Glasgow, this time serving the Offshore, Maritime and Renewables sector.

And I was then delighted to be offered the role of General Manager of the centre after the arrival of John Abate as Global Head of Training for Northern Marine Group in 2020.

What are your aspirations for CTS over the next 5 years

The first five years of CTS has seen a period of huge growth, both in terms of courses being added to meet the needs of each sector, but also delegates coming through our doors.

In the next 5 years I want to see us capitalise on these foundations and move on to the next level as a training provider for existing and new clients within all our service sectors.

I have to ensure that our strategic vision, to be the Internationally recognised strategic partner of choice, delivering customer focused competency solutions within the shipping and energy sectors, is being realised.

We have established a strong base in Glasgow and the Central Belt of Scotland, serving a population that had to travel long distances to obtain training, but due to our strong transport links we are also seeing an increasing number of UK and International delegates attending our centre, and this is something we will look to build on.

We have recently introduced the strapline ‘Competency beyond Compliance’ to our business, and it reflects how we want to be perceived.

What aspect of your job do you enjoy most?

It might sound cliched, but I genuinely enjoy engaging with employees to ensure that our mission statement is being adhered to, which underpins our whole promise to delegates and clients.

We know from feedback received both internally and externally that our instructors are viewed very favourably by delegates under their instruction, being seen as engaging and professional.

But as a team – both instructors and office staff – need to ensure that we are adopting an innovative blend of traditional and digital methods, and data driven solutions that improve sector safety, competency and commercial operational performance for the end client.

Lots of people are keen to adopt new practices, but others need convincing that these will improve how we work, and I enjoy working with them to get to that stage.

And I enjoy the array of challenges that happen on a daily basis, no two days are the same as we don’t work in a static environment.

Tell us something that most people don’t know about you?

As a young lad growing up in 90s Newcastle, there was only one show in town. No, not Keegan’s swashbucklers, Byker Grove, and I was determined to be a part of it.

It got my chance in the mid-90s when I auditioned for the show and found myself up against the then unknown Charlie Hunnam. I was sure I had it in the bag though before being told in no uncertain terms by the casting agent that: ‘I wasn’t aesthetically pleasing enough!’

Still, if I had been chosen I might not have taken the path I did which led me to Houston and meeting my amazing wife, which ultimately led to me becoming a dad for the first time in 2021.

You can find out more about which cookies we are using or switch them off in settings.